The music school was filled with music this Easter with our Songwriting Workshops with local musicians Adela Meally and James O’Connor. 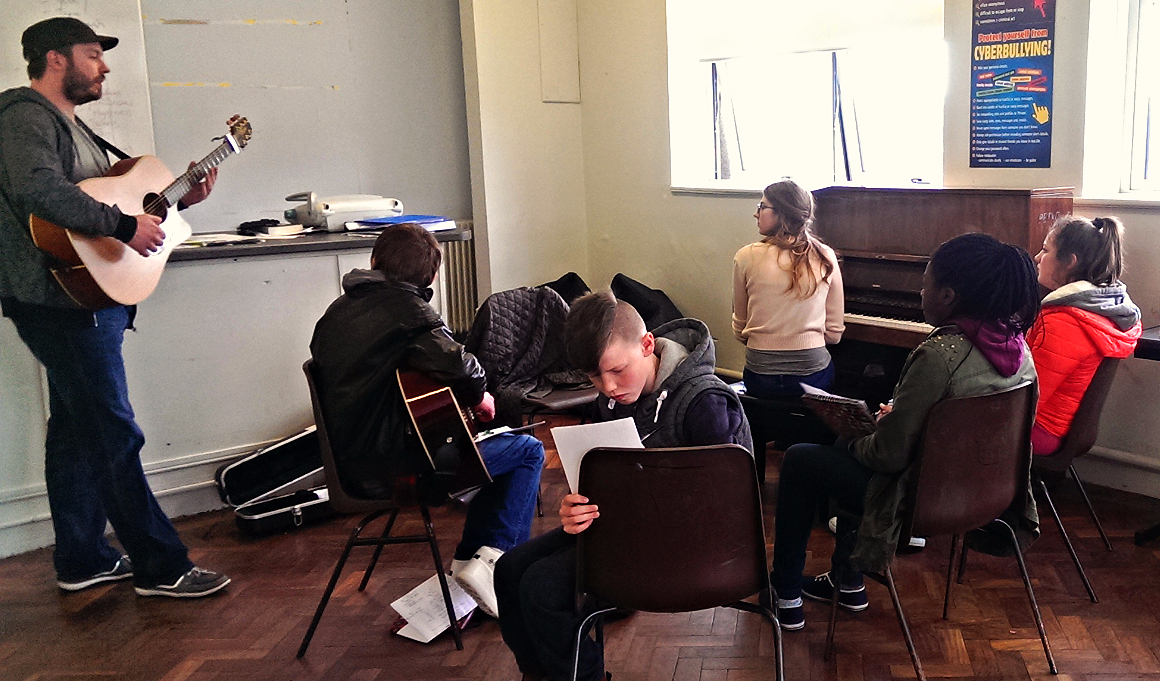 Over the course of a two-day workshop, budding songwriters were encouraged to unleash their musical creations under the guidance of songsters James O’Connor and Adela Meally.

The groups, ranging from ages 10 – 17 years comprised of vocalists, poets, and a variety of instrumentalists. They were taken through the steps and techniques of writing their own music and also analysed some of today’s top hits to see what made them hits!

Groups were formed and their songs started to take shape with their final performances happening at the end of the second day. We were delighted to see how far the groups came in such a short time and hope that they will continue with their composing!

The Mount Leinster Traditional Music Camp ran from March 27 to March 29. The Laois group had the opportunity to work with some of the top traditional musicians in the country, including fiddle player Zoe Conway, concertina player Jack Talty and traditional flautist Conor Crimmins.

As part of the event, on Saturday March 28 there was an intimate evening of music in the Sacred Heart Church. The evening of traditional Irish music featured acclaimed musicians such as Zoe Conway and John McIntyre (fiddle and guitar), Damien Mullane (button accordion), Jack Talty, Aimee Farrell Countney (bodhrán), Conor Crimmins, and Dave Power (uilleann pipes).

See a video of their end of camp performance here:

We’re now gearing up to host a three-day traditional music summer school from July 7 to July 9 in Portlaoise. For more information on this, contact us on 057 8664176, or email musicgenerationlaois@laoiscoco.ie for further details.

Music Generation Laois hosted a series of workshops with Musician and Composer Alexander L’Estrange, entitled ‘Singing Pop and Jazz Styles.’ Alexander is from Oxford in England, and has composed many large-scale choral works for Community Choirs and schools, and he brought his wide expertise to Laois on Wednesday 18 and Thursday 19 of March.

Over 110 performers took to the stage on an array of instruments including harp, uilleann pipes, piano, euphonium, saxophone, singer-songwriters, flute, violin and cello. The performers crossed all ages, children and adults, and the festival featured a multitude of styles and genres including classical, traditional, folk, singer-songwriter and jazz.

It was great to see such a good turnout on a sunny Sunday afternoon with friends, parents, grandparents and everyone else popping in to see the performances.

In the final session, the gathering audience was treated to a performance by the Laois School of Music Youth Orchestra who were travelling to Scotland for St. Patrick’s Weekend for a weekend of performing with Scottish Musicians. The orchestra is conducted by well-known fiddle player, John Davidson.

The festival was non-competitive, however, Music Adviser, Martin Barrett from County Cork School of Music, was on hand to give feedback and words of advice to each performer and to award medals.

A great day was had by all and we look forward already to next year’s festival!

Irish TV were there on the day to film some of the performances. To see a click here and go 17.30!

Written by Webmaster on September 19, 2012. Posted in Latest News

The Art of Sound is a photographic and multi-media exhibition devised by the Dublin-based Contemporary Music Centre, and is currently on display in The Arthouse and Library, Stradbally, Co Laois until November 30th.